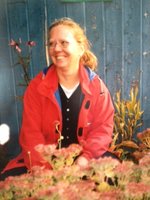 Kate was born in New Richmond Quebec on July 22, 1953, she was the daughter of the late Joseph Arthur Bruce Kelly and June (Reed) Kelly both of Quebec. The family moved to Fredericton where her father worked within the Forestry Department of University of New Brunswick. Kate was raised in Fredericton with her four sisters: Maureen, Theresa, Colleen and Molly; and her brother, Bruce. In the early 1970s Kate attended the University of New Brunswick and worked and traveled with Theatre New Brunswick. She loved the theatre and got to travel and work with many close friends. She also worked as a social worker with a women's shelter in Fredericton offering women some hope in difficult situations. In 1974; Kate traveled Europe with a single side bag and spent a lot of time in Greece and Ireland, where her family is originally from (Kelly). In 1978, Kate met her soul partner, Rei Egbers, and moved in with him to become an organic farmer on a remote 106 acre farm that had its own private valley with a watershed. She liked to walk and cross country in the woods. She planted in the greenhouse in the spring and worked in the fields to grow organic herbs and vegetables during the summer. they were wed in 1980 and on June 28th of that year their first son, Reed was born and on November 17, 1983 their second son, Adrian arrived. Kate and Rei lived off the land and raised their young family on an organic produce farm in the woods with no electricity or running water. Selling and delivering organic food at the farmers' market and to stores. On weekends the would enjoy Canoeing, camping and exploring the Maritimes. In1992; they began sailing with family in the warm waters of the Northumberland Straight and had many wonderful adventures sailing, snorkeling and walking the long beaches along the coast of NB and PEI. Later in the 1990s, Kate taught herself to write and submitted manuscripts to publishing companies, writing competitions and won the Daphney duMorrier award in 2006 and the River City Writers Award in 2009. In the following years Kate and Rei sold the farm in the woods and built their dream home overlooking the Bellisle Basin in Kars, New Brunswick, her first novel "A Deliberate Father" was published in 2011 by Harlequin, followed by "When Adam Came To Town" in 2013, "To Be A Dad" in 2014, and finally "Only You" that was published with amazon on May 19th 2015. Many other books written by Kate were available online only. In the fall of 2011 their son Adrian married Josie Marcille and in Jan 2015 Reed and Naomi Harper were wed. In the summer of 2012, Kate becomes a grandmother to her first grandchild, her granddaughter, Quinn, followed by her grandsons Desmond, in March 2014 and Kai in Jan 2015. Kate and Rei spent the winter 2014 and 2015 sailing the tropical paradise of the Bahamas. Kate will continue to live on in the hearts Reindert "Rei" her soul mate for over 36 years, her sons: Reed and his wife Naomi Harper of Halifax and Adrien and his Josie Marcille of Gatineau, Quebec; her brother, Bruce Kelly of Chemainus BC; her sisters: Teressa Kelly of Fredericton, Molly Kelly (James Miller) of Chemainus, BC and Colleen Collett and her husband Coburn of Harvey, NB. their grandchildren: Quinn, Desmond and Kai; as well as by several nieces and nephews. Kathryn Jane Kelly of Kars, passed away at her home with her family at her side on July 20, 2015 at the age of 61. She is predeceased by her sister, Maureen Borland who passed away in 2006. Arrangements have been entrusted to the compassionate care of Wallace Funeral Home, 34 Sunnyside Drive, Sussex, (506-433-1176) where visitation will be held on Saturday, July 25th from 2-4pm. A private family service celebrating Mrs. Kelly’s life will be held. If you would like to place a memorial donation - We are asking people to donate to a research project at University of Windsor that is doing clinical trials to cure cancer with dandelion root extract. www.wallacefuneralhome.com