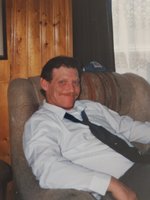 Mr. Robert “Bob” Allan Bentley MacVicar was born in Saint John on November 16, 1958. He was the son of the late Clifford MacVicar and Sandra (Warring) Sawler.

Bob was a hardworking man. He worked for Prestige Homes for over ten years. He liked to stay busy whether it was watching his beloved Toronto Maple Leafs, reading or listening to music; doing puzzle books or dabbling in woodworking.

Bob moved around alot as a child, but his favorite memories were in Martinon, Saint John and at the camp in Mascarene, St. George. Both were on the water, which is where you would find him and all his siblings. Rick and Bob were the oldest of the bunch, and the Ricky and Bobby duo were always getting in mischief and it usually involved Bernie. From throwing Bernie out the second story window of the home into a snowbank in his underwear, and he gets a spanking from the old man for being outside in his underwear!. One time him and Rick also hooked up an electric hand crank generator to the door knob of the house and every time his mother would grab a hold of the knov she got a big shock, they passed it onto Bernie and he was the one caught with it and then he got a spanking for that one too! He and Rick were always made to take their younger siblings with them, whether it was swimming or skating etc. They always protested at first, but always made sure they were safe and had fun. He often watched wrestling matches on tv, and later would try all the new moves on his siblings.

Bob was the only sports inclined ones out of the bunch, being two time Golden Gloves of New Brunswick for Boxing and excelled in Softball and hockey to golf. His favorite pastime was spending time with his family.

Bob was a very smart person, skipping two grades in school and also failing a grade because he never showed up. Bob graduated from high school in 1975,  and moved on to do several different jobs. He was a skilled carpenter and that is what he did for most of his life. He met Hilda in 1981 and he raised Kerry and Kelly as his own. They married in 1983, and one year later in 1984, his little stinker (Erin) was born and four short years later in 1988, his Big Guy (Adam) was born. He passed down his passions to his kids, they definitely knew how to throw a punch, and him being a catcher for so many years was passed on to both Erin and Adam. His devotion for his beloved Toronto Maple Leafs was brainwashed into his kids at a young age. There was NO other team! Every Saturday night was hockey night in Canada at the house to watch the Leafs!Bob also had a strong passion for music, you would often see him sitting on the floor beside the record player listening with headphones on, and the feet moving to the beat! He loved to read, the only man we knew that would pick out a letter from the encyclopedia collection and start reading. He always was sitting in his chair with the feet up reading the newspaper after supper every night.

He also will be remembered by some very close friends: Rainer, Lenny, Johnney F., Randy, Mike K and many others.

Mr. Robert “Bob” Allan Bentley MacVicar of Sussex passed away at the Saint John Regional Hospital on April 1, 2021 at the age of 62.

Along with his parents, he is predeceased by his sisters: Janice Trites (Mark) and Candice Sawler and by his brother, Rick MacVicar.

Arrangements have been entrusted to the compassionate care of Wallace Funeral Home, 34 Sunnyside Drive, Sussex, (506-433-1176. Due to Covid-19 a private celebration of life will be held at a later date.

If you would like to make a donation in Bob’s memory, the family has requested the Living Memorial. Online condolences and donations may be made through www.wallacefuneralhome.com.