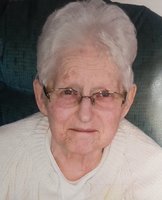 It is with sadness the family announces the passing of Joan Fanjoy, 83, of Sussex, on May 28, 2021 at the Sussex Health Center. Born in Petitcodiac on February 8, 1938, she was a daughter to the late Raymond & Grace (Ferguson) Hughes.

Joan worked for NBTel as an operator in the 50's and 60's. After marrying Cecil Fanjoy she worked raising her family and helping with the family business. After Cecil's death she worked at KC Record Office and finished her career working for Royal Lepage. She volunteered many hours at the Sussex Royal Canadian Legion. She enjoyed her family's camp in Penobsquis with family, close friends and her two little dogs who meant the world to her.

Joan is survived and sadly missed by her daughter, Laurie Dunfield; her sons, Douglas and David (Tracy Johnston) Fanjoy; her brothers, Lloyd (Verna) and Gary (Sharron); grandchildren: Erin (Dain), Connor, Garrett and her great granddaughter, Savannah, as well as several nieces and nephews.

Besides her parents, Joan was predeceased by her husband Cecil in 1979, her son Dale in 1977 and son-in-law Bryant Dunfield in 2015.

The family would like to express a special thanks to the Primrose Cottage for their dedicated service, care and understanding for the last 6 years.

Arrangements have been entrusted to the care of Wallace Funeral Home, 34 Sunnyside Drive, Sussex, NB (433-1176). Due to Covid-19 all arrangements will be held privately.