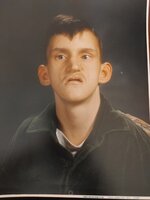 George William Olsen was born on March 12, 1985; he was the son of Donald James and Margaret (Dean) Olsen.

He was a ray of sunshine; he may not have been able to talk but when he wanted to see us he would yell until he could see us. He walks with the angels now, something he could not do in life.

George will live on in the hearts of his mom, Margaret; his sister, Barbara Ann Olsen; his brothers: Donald Arthur Olsen and Kenneth James Olsen all of Wards Creek; as well as several extended family members.

He is predeceased by his father, Donald James Olsen.