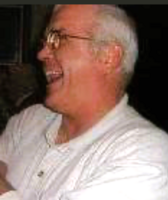 Richard Fudge of Smiths Creek, NB passed away too soon on April 28, 2022 at the age of 65, after a courageous battle with cancer.

He will be dearly missed by his beloved wife of 32 years, Valerie Spence; his only daughter, Kari; his sons, Kirk (Jenn), Michael (Mindy), and Ricky (Mel). Richard (Bubba) will always live on in the hearts of his 15 grandchildren and his one great-granddaughter. He is also survived by his two brothers, Anthony and Fred; and his four sisters, Burla, Bonnie, Cathy, and Paula. Richard was predeceased by his mother, Mae (Barton) Fudge, and his father, Burton Fudge.

Richard dedicated 43 years of his life working at Sussex Tire and will be missed by the many friends he made. Should you ever hear the screech of tires of a 1976 Nova or a 1973 Astra, think of Richard.

Arrangements have been entrusted to the compassionate care of Wallace Funeral Home, 34 Sunnyside Drive, Sussex, NB (506-433-1176). At Richard’s request, all arrangements will be held privately.

Donations in Richard’s memory may be made to a Living Memorial. Personal condolences to the family and donations may be made through wallacefuneralhome.com.