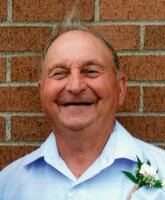 It is with deep sorrow that the family of Alton Edward Chown announces his passing Sunday, July 24, 2022. Born at his family home in Gibbon Mountain, NB April. 19, 1943, he was the son of the late Edward and Florence (Parlee) Chown.

Alton always lived life to the fullest! He left school by Christmas in grade eleven to drive truck for his father, which he loved. Upon his dad's passing in 1979, Alton gave up trucking full time to manage the family farm. He enjoyed raising and showing Black Angus cattle, receiving many awards as it was a family operation.

Alton could most always be seen with a smile on his face or a joke to tell. Many a funny story is told of projects on the farm. Alton loved his family and spending time with his grandchildren and great grandchildren. And, he was pleased as punch to meet his newest great granddaughter, Allison, just last week.

In Addition to his parents, Alton was predeceased by his sister Jean (Long) Kelly and his brothers-in-law, Arlington Kelly and Ronald Kierstead.

Arrangements have been entrusted to Wallace Funeral Home, 34 Sunnyside Drive, Sussex, NB (506-433-1176), from where visitation will be held on Wednesday, July 27 from 2-4 and 6-8pm. A memorial service will be held at Sussex Baptist Church on Thursday, July 28 at 2:00pm, with a committal service following at Keirstead Mountain Cemetery.

Donations in memory of Alton may be made to the Keirstead Mountain Cemetery Fund, NB Extra Mural or a charity of the donor's choice. Personal condolences to the family and donations may be made through wallacefuneralhome.com