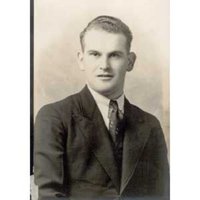 Mr. Edgar Murray (Ted) Patterson of Primrose Cottage and formerly of Roachville, N.B passed away at Sussex Health Centre on December 12, 2004 at the age of 84. Born in Roachville N.B. on December 10, 1920, he was the son of the late Richard A. and Mary Jane (MacFarlane) Patterson and the beloved husband of the late Jessie Elizabeth (Keith) Patterson who passed away in 1999. Ted is survived by a daughter, Susan Gilbert and husband Neil of Fredericton, NB 3 sons, Ronald and his wife Carlene of Amherst, Richard and Carolyn Holyoke of Fredericton, Bill of Toronto, his sister, Edna Mawhinney of Maces Bay, his sister-in-law, Anna Patterson of Saint John, 6 grandchildren, Stephanie, Brent, Peter, Christine, David and Ted, and 4 great grandchildren, Matthew, Ellen, Adam and William as well as several nieces and nephews. Ted was predeceased by 2 brothers William and Douglas and by 2 sisters Doris Swan and Verna Mawhinney Ted was a farmer most of his life and an avid Plowman. In later years he was a spice blender with Barbour Foods. He was a member of St. Paul's United Church and belonged to the NB Plowing Assoc. Arrangements are entrusted to the care of Wallace Funeral Home, 34 Sunnyside Drive, Sussex, (506-433-1176). The Funeral Service will be held from Wallace Memorial Chapel on Friday, December 17, 2004 at 2:00 pm. With the Interment in Roachville Cemetery.