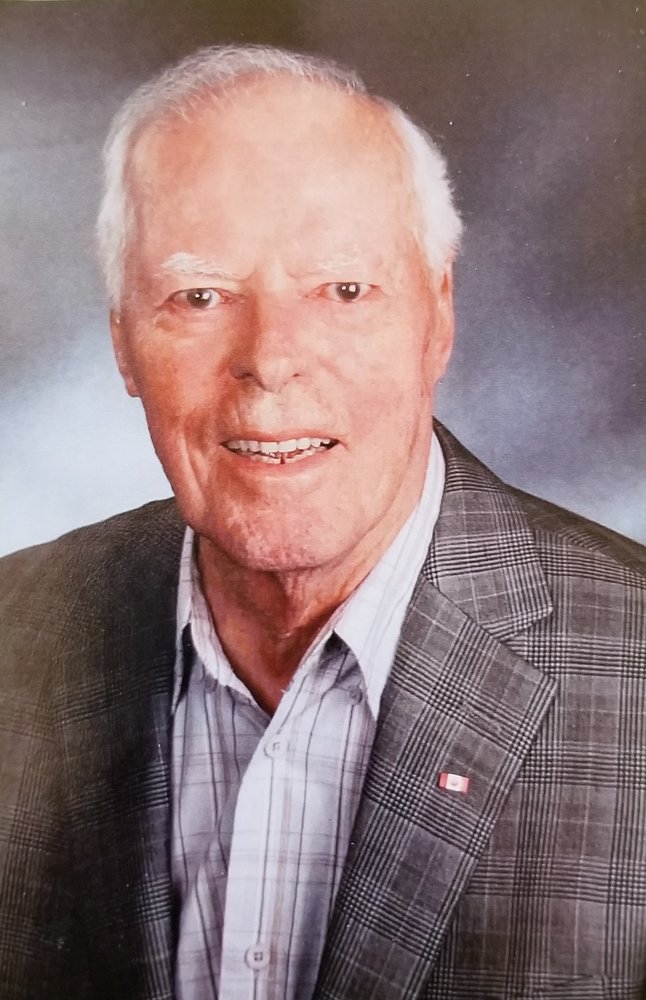 Marilyn and children David, Ken, Joan and Larry celebrate the life of Clement Victor Powell, husband of Marilyn (Davidson) Powell who passed away at the Kiwanis Nursing Home in Sussex, NB on Sunday, January 24, 2021 at the age of 88.

Clem was born in Petitcodiac, NB on May 28, 1932 to the late C. Clement and Cora (Colpitts) Powell. After graduating from Petitcodiac High School he went on to spend two years at the Provincial Technical Institute in Moncton, NB, graduating in 1951 with a Vocational Teaching License. He took a job teaching at Sussex High School in September 1951 and at the same time continued his education obtaining a B.E.D and Masters Certificate in Industrial Education. He retired from teaching after a 35-year career at Sussex High School in 1986. He built a house in 1987 in Sussex Corner, NB.

He and Marilyn married in 1952 and just celebrated their 69th wedding anniversary earlier this month.

He was a loving, principled, caring and multitalented family man. He was a member of the Sussex Baptist Church where he was Clerk and a Deacon as well as serving on various committees, he volunteered at the Sussex Agriculture Museum and on the Town of Sussex Planning Commission. He loved spending summers at the cottage at Grand Lake swimming, boating, water skiing and tinkering and where there was always a card game as well as maple sugaring in the spring. He and mom traveled across Canada and back through the States as well as the Eastern States. One of his passions was playing musical instruments. As a boy learned to play the violin, then later taught himself to play the piano, accordion, trumpet and mouth organ. His second passion was working with anything to do with wood. He made furniture, cabinets, puzzles, games, bandsaw art, wood carving and collecting and restoring old hand tools. He had a real talent for taking a piece of wood and turning it into something beautiful. He loved to have an audience and would have everyone laughing with his quick wit or joke.

The family would like to thank Extra-Mural, In Home care and the Staff at Kiwanis Nursing Home for their loving care and attention that he received.

Arrangements have been entrusted to the care of Wallace Funeral Home, 34 Sunnyside Drive, Sussex, NB. Visitation for Clem and Marilyn will be held at Wallace Community Chapel on  Sunday, October 3, 2021 from 4-6pm. A Celebration of Clem and Marilyn's lives will be held from Sussex Baptist Church, 28 Church Ave, Sussex, NB on October 4, 2021 at 1:30pm. Due to the recent COVID-19 regulations, Proof of Identification and Vaccination must be provided for entry and masks are mandatory. For those who cannot attend, live streaming will be available.  A private family internment will follow at Kirk Hill Cemetery.

Donations maybe made in her memory to a charity of the donor's choice. Personal condolences maybe offered through  WallaceFureralHome.com

Share Your Memory of
Clement
Upload Your Memory View All Memories
Be the first to upload a memory!