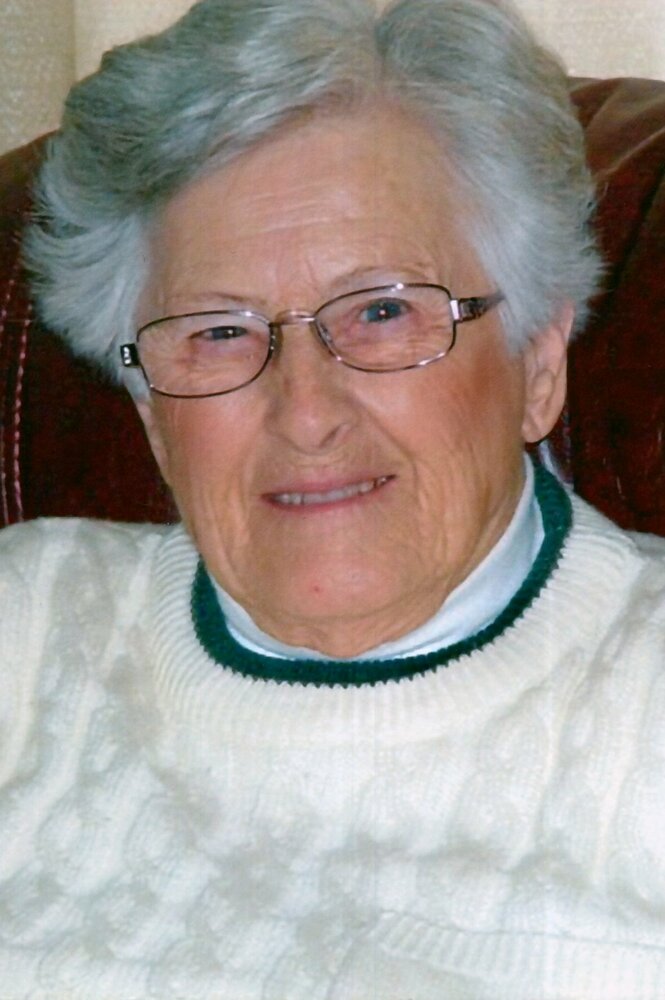 Mildred Pauline Holden McCutcheon started out as a rebel bucking the system. She didn't like her first name at all and chose to be called by her second name, Pauline.  She was born on March 5th, 1934, in Saint John, New Brunswick.  She was the daughter of the late Reginald and Annie (Barnes) Holden.

She had Polio as a child and was able to overcome it by removing her braces and doing what the doctor told her to do and run in the fields in her bare feet. She even ran through the cow patties.

She had loved the horse they had on the farm called Maud, and the horse must have loved her because when Pauline fell off the wagon and under the horse's belly the horse held her hoof up in the air to keep from trampling her.

When Pauline's mother got sick, Pauline wanted to stay home and take care of her, so she told her mother the teacher wasn't any good and she couldn't learn from her, so Pauline got to stay home with her mother. She enjoyed taking care of her mom. That may have been where her love and interest in the medical field came from. She was always trying to diagnose people and encourage them to go to the doctor. She had a doctor book and read it cover-to-cover many times over the years.

When she met Lewis, it was love at first sight and she said he was the one she would marry. After many obstacles, she finally got her wish, and they were married.

Life wasn't easy, especially when their daughter Betty was killed in a car accident at the age of 15. Pauline had a great devotion to our Lord and cared about family and friends. She would pray for them, and her prayers usually worked.

She had a love of old-time country music especially the fast waltzes and fast fiddling tunes. She and Lewis enjoyed dancing with each other and enjoyed going to the fiddle dos.

When Lewis and Pauline had the bottle exchange business in their garage, they did this together and enjoyed meeting and talking with the people.

Pauline always had a little wit and encouraging words to say to people. She was a very positive person, and never seemed to notice what others couldn't do, but emphasized the positives of what they could do.

When Lewis got sick with his aneurysm, she brought him home from the special care home and took care of him, even though his personality had changed greatly. She helped him as much as she could and nursed him as well as anyone could.

Pauline was a kind and caring foster mother to two girls, Pauline and Marilyn, in their teenage years just because her daughters had asked her to take them in. She was a very good mother to Betty, Louise, and Jean. When her first daughter, Karen, who she had to give up for adoption found her, she was finally complete and was happy to have reconnected with her and continued to keep in touch with her.

Pauline loved her four grandchildren: Jeff, Duane, Matthew, and Natalie and was always knitting mittens, hats, and afghans for them.  She was very proud of her grandchildren, and she would have done the same for her first grandchild, Angela Marie Belding, but she passed away in infancy. This was another sad time for everyone. She also had a great grandson, Brandon. She never really had a chance to get to know him but would have liked to.

Pauline had two brothers, Jerry, and Bill and three sisters: Joyce, Bernice, and Marilee. They enjoyed many good times together.

Pauline was the one to keep the family and friends together. She stayed in contact with them by writing letters and in later years by phone calls.

We will miss Pauline for her kind ways and caring manner and especially her witty remarks. We know Jesus has taken her to heaven and she is seeing all her loved ones. May she rest in peace. She will be loved forever and the rest of us will carry on as best we can.

She will live on in the hearts of her daughters: Louise Belding of Saint John, Jean Bowie and her husband Allan of Sussex Corner and Karen Parker of Prince Rupert, BC; her brother, Bill Harding, and his wife Joan of Shannon; her sisters:  Bernice Fanjoy of Sussex and Marilee Roberts of Ottawa; her grandchildren: Jeffery Belding and his wife Kim, Duane Belding, Matthew Bowie and Natalie Bowie; her great-grandson, Brandon Peters; as well as several nieces and nephews.

Mrs. Pauline McCutcheon passed away peacefully at the Sussex Health Centre on September 11th, 2021, at the age of 87.

Along with her parents, she is predeceased by her husband Lewis who passed away in 2010; her daughter, Betty Jane McCutcheon; her brother, Jerry Harding; her sister, Joyce McCutcheon and by her infant granddaughter, Angela Marie Belding.

Arrangements have been entrusted to the compassionate care of Wallace Funeral Home, 34 Sunnyside Drive, Sussex, (506-433-1176). A celebration of Pauline’s life will be held from Wallace Community Chapel on September 15, 2021, at 11:00am. The interment will take place in Trinity Cemetery.

Share Your Memory of
Pauline
Upload Your Memory View All Memories
Be the first to upload a memory!
Share A Memory