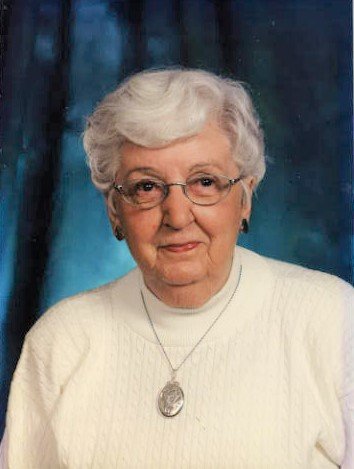 It is with sadness that the family of Doreen Constance Lutes, age 95, wife of the late James “Ralph” Lutes announces her death which occurred on Saturday, January 9, 2021 at Kiwanis Nursing Home, Sussex.  She was born on February 2, 1925 in Westfield, NB, a daughter of the late Wellesley and Rose (Bennett) Porter. Wellesley died when Doreen was only 3 months old. Her mother Rose, remarried several years later to Eldon Card.

Doreen graduated from Saint John High School in 1942 and worked in Saint John for several years after graduation.  One of her jobs was at the Bank of Nova Scotia on Prince William Street.

Doreen married Ralph Lutes in 1949 and they moved to Montreal, Quebec where they raised their two daughters. Doreen did some travelling over they years, most notably San Diego, Calgary, Ottawa and PEI.  She also enjoyed several bus trips with her good friend, Justine, throughout the northeastern United States.

She always had a talent for crafts, particularly knitting and sewing.  Over the years she has produced dresses and sweaters for her daughters and grandchildren.  She also taught her daughters to knit and sew.  Doreen also tried her had at smocking, crocheting and quilting.

Besides her husband Ralph and parents, Doreen is also predeceased by her niece, Brenda Olive and nephew, Peter Olive.

Arrangements are entrusted to the care of Wallace Funeral Home, 34 Sunnyside Drive, Sussex NB (506-433-1176) and due to COVID-19 all services will be held privately.

Donations in memory of Doreen may be made to the memorial of the donor’s choice. Condolences to the family and donations may be made through WallaceFuneralHome.com

A special thank you to the Kiwanis Nursing Home in Sussex, NB for taking such good care of Doreen and providing her with a home away from home.

Services for Doreen Lutes
There are no events scheduled. You can still show your support by planting a tree in memory of Doreen Lutes.
Visit the Tribute Store

Share Your Memory of
Doreen
Upload Your Memory View All Memories
Be the first to upload a memory!
Share A Memory
Plant a Tree