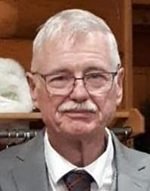 It is with great sadness that the family of David Galpin, 64, announce his passing after a brief battle with cancer on February 17, 2021, in Sussex, NB. David born on May 17, 1956 was the youngest son of Sylvia and Lou Galpin

David was a great family man and a loving father. He took great pleasure in being a foster parent for the last 35 years. He and his wife had fostered over 80 children in that time period making many lifelong connections.  He enjoyed fishing, and long walks with his babies in their stroller.

His family and friends will always remember him as a patient and helpful person.

He is predeceased by his father, Lou Galpin and his chosen daughter, Sarah McDonald.

Arrangements have been entrusted to the care of Wallace Funeral Home, 34 Sunnyside Drive, Sussex (506-433-1176). Due to Covid-19, a Celebration of David's life will be held on a later date with a gathering at his home in Sussex.

Services for David Galpin
There are no events scheduled. You can still show your support by planting a tree in memory of David Galpin.
Visit the Tribute Store

Share Your Memory of
David
Upload Your Memory View All Memories
Be the first to upload a memory!
Share A Memory
Plant a Tree