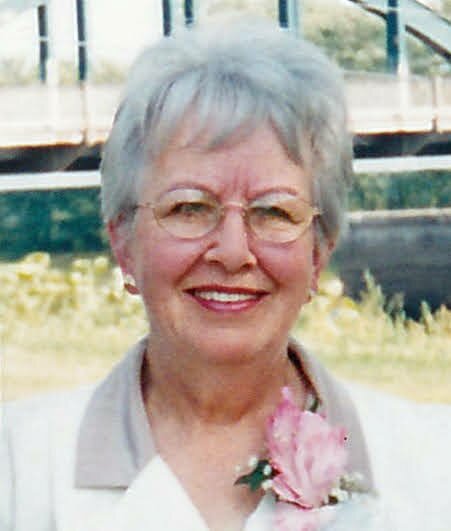 Georgina Marie Sleep was born in Bagdad, NB, on February 27, 1938 to Norman and Lena (Vail) Jeffery. She was the third of their five children.

As a newlywed at the tender age of 19, she boarded a plane with four-month-old Karen to join Stanley (RCAF) in Marville, France. They returned to Canada three years later with two more youngsters, Cindy and Paul. After four years in Kensington, PEI and the birth of daughter Laurie, Stanley and Marie returned to their Queens County roots and purchased a country store in Coles Island. Daughter Chanda completed the brood and their family flourished along the Washademoak.

Marie and Stanley were married for 61 years and worked together running farm and store and raising their family. Their homestead was the gathering place for family and friends for many years.

Later, without farm or store or kids, they worked in sync processing the garden's bounty - freezing, canning, pickling, and storing to share with their friends and family. In retirement, they established a beautiful apple orchard with 50-60 trees of many varieties.

Marie always had a place at the table for one and all and could muster delicious “made from scratch” meals and desserts on short notice. Everyone had their own favorite: Gaspe fruit pudding, scotch cookies, rolls, bread, biscuits, jam jams, donuts, and oh, so many pies. When she had leisure time, she enjoyed knitting, quilting, crocheting, reading, painting and gardening. For many years, she was a member of the Bagdad Community Club and then later enjoyed being a member of the Sussex bowling league. When Sunday evening rolled around, she and Stanley always had a date with the Weekend Jamboree.

Arrangements have been entrusted to the compassionate care of Wallace Funeral Home, 34 Sunnyside Drive, Sussex, (506-433-1176). Her family will be receiving friends and relatives on Sunday, August 21st from 1:00pm to 2:30pm for a time of visitation and reception, and a service celebrating Marie’s life will be held at Wallace Community Chapel at 3:00 pm.

If you are considering making a memorial donation, the family recommends Coles Island Volunteer Fire Department, NB Heart and Stroke, NB Lung Association, or a charity of the donor's choice.

A private interment will take place at a later time.

Share Your Memory of
Marie
Upload Your Memory View All Memories
Be the first to upload a memory!
Share A Memory